The Guardian and the Retail Gazette reports that Dominic Chappell has come under fire from HMRC who have started legal proceedings against him in the form of issuing a winding-up petition at the Companies Court against Swiss Rock Limited. 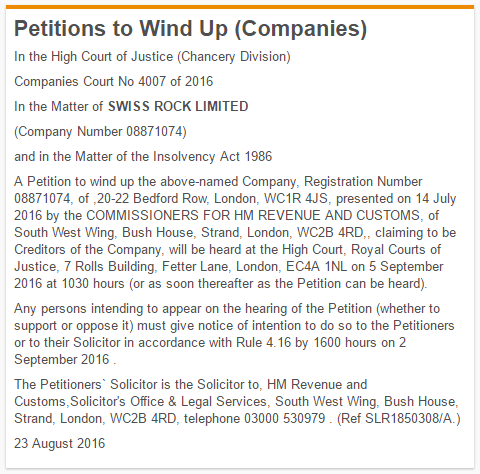 The former BHS owner, who is already being investigated for his handling of the department store giant’s downfall, is now being chased by the HMRC over tax disputes according to The Guardian.

HMRC have issued a winding-up petition against Swiss Rock Limited (Registration Number 08871074) and advertised in the Gazette that: a hearing is scheduled for Creditors of the Company, to be heard at the High Court, Royal Courts of Justice, 7 Rolls Building, Fetter Lane, London, EC4A 1NL on 5 September 2016 at 1030 hours (or as soon thereafter as the Petition can be heard).

“HMRC does not comment on identifiable cases. Our aim is to efficiently collect the debts due and to prevent things deteriorating further.

“We only initiate winding up action where we believe this is the best way to protect both the interests of other taxpayers and creditors.”

Swiss Rock received at least £1.6 million from BHS during its acquisition by Chappell.

Despite the investment, Chappell announced before the winding-up petition that Swiss Rock would go into insolvency. He appointed David Rubin and Partners as Insolvency Practitioners.

Regardless of being under investigation by the Insolvency Service and the Pensions Regulator, Chappell has as yet failed to submit details of the money his company removed from BHS, despite promising to do so in July.