Directors at boutique hotel The Blue Ivy, have appointed Greenfield Recovery as liquidator following a dispute with an Edmundson Electrical. The hotel on North Hill, Colchester, has called in liquidators after a petition to wind up the company running the hotel was presented by creditors. 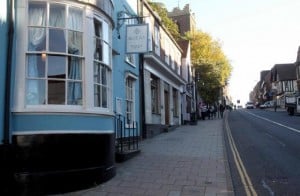 Kitchen porter at Blue Ivy from October until January Dav Da Frera, claims he has only been paid a total of £879.95 for his work, considering his monthly salary after tax should have been £1,120 he has been underpaid considerably. Upon leaving the hotel Mr Da Frera started working with a care agency and was forced to work 80 hours to make up for his shortfall in income. Mr Da Frera was considering his dispute with employee advice service ACAS, but was informed they were not able to take up the case because the company was in liquidation.

Mr Da Frera reportedly had this to say:

“It is disgraceful. They have been withholding my pay slips and my P45 from when I left and I have got all the paperwork to prove what I am owed.”

The former home of law firm Thompson, Smith & Puxon which is now The Blue Ivy Hotel and has only been open since October following a refurbishment process. Director Carl Blanchette said the hotel was open as usual and the threat of closure was not realistic despite having the company voluntarily wound up.

In a bid to put staff and customers minds at rest Carl Blanchette reportedly had this to say:

“The dispute is with an electrical company which was from when the building started. We are working through it with the help of our recovery company and there is no threat to the hotel.”