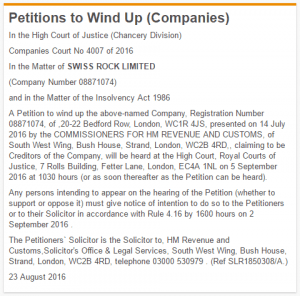 In the Matter of SWISS ROCK LIMITED

and in the Matter of the Insolvency Act 1986

A Petition to wind up the above-named Company, Registration Number 08871074, of ,20-22 Bedford Row, London, WC1R 4JS, presented on 14 July 2016 by the COMMISSIONERS FOR HM REVENUE AND CUSTOMS, of South West Wing, Bush House, Strand, London, WC2B 4RD,, claiming to be Creditors of the Company, will be heard at the High Court, Royal Courts of Justice, 7 Rolls Building, Fetter Lane, London, EC4A 1NL on 5 September 2016 at 1030 hours (or as soon thereafter as the Petition can be heard).

Any persons intending to appear on the hearing of the Petition (whether to support or oppose it) must give notice of intention to do so to the Petitioners or to their Solicitor in accordance with Rule 4.16 by 1600 hours on 2 September 2016 .